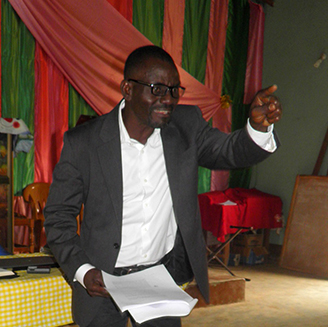 Tchangai Kpelafia is a church planter from Togo who received the training provided by Multiplication Network Ministries (MNM). Tchangai is happy and grateful to have experienced God performing great transformations in Togo through the work of the church planters.

At the beginning of the year, Tchangai met with Mike Okuneye, the West Africa Director, and Adeyinka Adekanye, the Database Administrator, to discuss the coming year and how they could move forward, making more progress in the work of MNM. Recognizing the need for more open doors and willing capable hands to help spread the work of the ministry across the regions in Togo, these three men prayed and trusted God to show them the answers to their prayers.

Tchangai reports that, thanks to God and His faithfulness, his ministry has been expanding. One such example of how God has paved the way and brought people to the ministry was when Tchangai was on a bus to the city of Dapong to start a new ministry center. While he was travelling, he felt led to share the gospel with a man next to him and talk about MNM’s ministry.

As he was sharing MNM’s vision and mission with this man, a woman nearby joined the conversation. When they got off of the bus, she immediately took Tchangai to meet her husband. Unbeknownst to Tchangai, this woman was married to a pastor named Kokue Adoboe Gagnon. This pastor had been praying for opportunities to partner with ministries that have church planter training as their mission. Pastor Kokue was excited to meet Tchangai and hear about MNM’s ministry. Pastor Kokue looks forward to partnering with Tchangai and MNM to start a new center in his community and to train more than 10 church members in MNM’s program. God continues to be faithful and Tchangai is eager to see what else He has planned for this ministry.